In response to The Daily Post’s writing prompt: “Menagerie.”

I admit, i am one of those people.  My animals are my babies.  Am I using them as a substitute since I most likely will not have children of my own? Maybe. And to be honest, I’m good with that.

﻿My oldest is a Dachsund named Frank (he’s supposed to be a mini, but that’s debatable).  He was on his way to a kill shelter when one of my husband’s co-workers mentioned she was trying to find a home for this puppy.  He came home with us.  I don’t think the kids that were “raising” him treated him right.  It took a year of retraining before we could put shoes on in front of him and he didn’t completely freak out.  He never completely got over it and to this day is very neurotic and insecure if he is not with either myself or my husband.  This led us after a year or two to talk about getting a second dog, so he could have a companion while we worked and stopped tearing up the house and potentially hurting himself.

The logical progression introduces our Shih Tzu named Deanna (my little girl).  She had just been born and was inhabiting a sailboat with her mother, puppy siblings and human parents.  The human mother loved the puppies, but the human father was adamant about the fact that four puppies could not be raised on his sailboat.  I really can’t say that I blame him.  So, we met the puppies and proposed taking one of the, of his hands so Frank could have a companion.  Oh if I had known how “companionable”  they were really going to be! 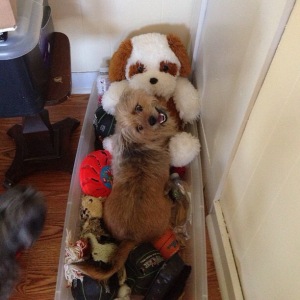 So now enters our third and youngest dog, a Dachsund-Shih Tzu mix named Joey (I quickly hit Google once I realized my poor little girl was pregnant — my ignorance for not realizing she was old enough — and found the puppies would be called Schweenies and they are actually a designer breed on the West Coast).  Too bad I live in a small town on the East Coast where people are far more likely to pay for hunting dogs.  No matter. We kept one and found homes for the other five, yes my brave little 10 lb girl gave birth to six puppies, all male!  He has now taken over as Alpha of the house as Frank is ready to retire and spend his golden years resting on the sofa, his only care being to try to attack the TV if an animal appears.  (You should see him during America’s Funniest Videos animal segments — freakin’ hilarious…) 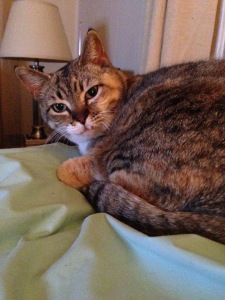 To round out my little zoo, let’s not forget Lassie the cat.  She started out as a feral cat that decided she liked our backyard. One day, about seven years ago she founded her way into our house and hasn’t left ever since.  Believe me, my husband has tried.  Left the back door open for a full day one time, trying to get her back outside.  She won’t take the bait. She adopted us as being the people she wanted to feed her and clean up her litter box.  Every so often she’ll even show a mild affection towards us. And as much as she and the male dogs pretend to despise each other, I’ve caught them all napping on the same bed before, butts touching.

One thought on “My Fur Babies”

My Tweets
A Walk in the Garden

Cooking with a Wallflower
Shadow Realities : Expressing the shadows of my life
Food for Poetryy

This is a flash fiction site where you finish the story!

Tales from the mouth of a wolf

a radish in the rough

The Nucleus of the Universe for all Nerd Hacks!

a girl in fringe, pretty in red

Elizabeth + Lipstick
A More BeYOUtiful You

Tips, information, and careful reviews for a more BEYOUTIFUL YOU ♥

The Physician Wellness Movement and Illegitimate Authority: The Need for Revolt and Reconstruction

this is... The Neighborhood

the Story within the Story

Welcome to the world of cats!

Not bad for a fat girl

A Narcissist Writes Letters, To Himself

A place filled with mostly unfinished stories. Begun primarily as a direct result of my association with the OC Writer's Guild

The Gad About Town

Because poetry. And petals.

The Official Home of Matthy

Giving You Great Ideas For A More Comfortable Home

Bits and pieces of life to be (not) forgotten

The Bella Travelista
Baby Gates Down

“If you have the words, there's always a chance that you'll find the way.” ― Seamus Heaney

Welcome to the Feline World of Nera, Tabby and Fluffy

Chronicles of an Anglo Swiss

Welcome to the Anglo Swiss World

Found This Painted That

Decorating Solutions for the Dollar Challenged

Traveling the world with birds by my side.

Cultural suave is an acquired taste.

life, the universe, everything. Tales and poems to move and inspire

My Blog at the End of the Un!verse

In search of the joy to be alive

Read all the books!

All Things Cute and Beautiful
SpanishMossSeries

Moonlight glistening on the water shaped how the evening developed...